A number of years ago I attended my very first writer’s conference in my hometown of Eugene, Oregon.

Living ten minutes away it felt like a pretty good deal. My wife dropped me off in the morning and picked me up at night. I skipped the breakfast and dinner portion and headed straight to the classes.

Looking back I had a lot to learn.

I was wide eyed, a tad overwhelmed, plus I had no idea what I was doing or if I even belonged. When it was all over the biggest takeaway that I had were meeting fellow writers and listening to the equally amazing instructors.

The combination of the two led me to believe that I actually had a shot at this.

Fast forward a few years later to the summer of 2017, August in case you’re scoring at home, I headed north to Portland, Oregon for writer’s conference number two.

I arrived with a bit more experience. I belonged to a couple of writer’s groups. I learned that the first draft was far from the only draft, but most of all I learned that this writing gig was hard on the brain.

My goal is to attend the Portland conference this summer but my right knee and a possible knee replacement may have a say in all that. But until then, the plan is in the works for writer’s conference number three.

If by chance I don’t make it I thought I’d pass along a few things for those of you who are planning to attend for the first time.

Below is a list of things I wish I had known when I took my first steps into the unknown.

Even if the conference is held in your home town make plans to spend the night in the hotel that is hosting it. Yes, it’ll cost more but this is an investment and if you are serious into making this a career it is well worth the cash.

Late night conversations will happen. Plus, by staying the night, it will make it easier for you to attend the early morning breakfast. 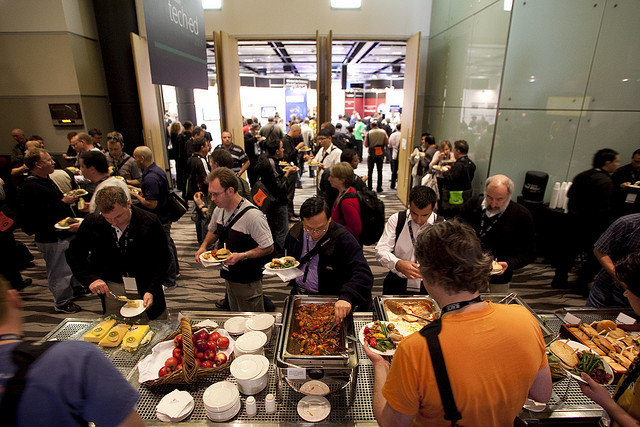 Connections are made by way of food. Remember that. Writing is solitary work but conferences are not. They are a time for group gathering and socializing. Most of those two things can be found at the breakfast, lunch and dinner table. Never eat alone. Save that for another time.

Study the list of classes long before you arrive. Select the ones that match your writing interest, your genre or pick the ones that sound like fun.

At the same time pick one that is way outside your circle. Conferences are a time to be daring and you might be surprised at the ones you choose.

The biggest mistake I made in Eugene was reverting back to my high-school days. I sat in the back and pretended I was invisible.

Ask questions. Make comments. Argue is you must but be respectful if you do. Remember: You want people to like you. No burning bridges.

Whatever you do take the shy student that’s dying to get out and boot it out the door. They can appear in your work but not at the conference.

They are the best. It’s as simple as that. Do your best to thank them. Ask follow up questions after class if time allows and be sure to get on their mailing list.

I will give my personal opinion of pitching in a later post. For now I will say it is a nice experience to partake in.

What is pitching, you ask? Pitching is a ten minute conversation with an agent where you try your hardest to sell them your work.

For some this is nerve wracking. The things I saw will require one or two posts to cover but for now let me just say that this nerve wracking stuff doesn’t have to happen.

The chances of a New York City agent being floored by your pitch is slim. They are pros and they have seen it all but it does happen. Not a lot, but it does.

The odds are stacked against you and because of that you have no reason to be nervous. In fact this a perfect time to enjoy the experience of meeting a big time agent.

Oh, one more thing: It will cost you $25 for those ten minutes.

An agent is just a person doing their job. They are nice. They are helpful and they want you to succeed.

The best conversation I had was in an elevator when both of us were headed to the same floor. We spoke for about ten minutes and it was far better than the pitches I paid for and a lot more honest.

Participate in games. Even if you choose not to play at least be there. Their purpose is to laugh, have a drink or two and toss away the seriousness of it all. They come at the end of the night allowing you to end your evening in giggles.

The greatest classroom that I discovered came in the form of fellow writers. I learned more than any instructor could ever teach.

Because of this I suggest you keep your phone handy. Or, if you’re old school, keep a tiny notebook along with a favorite pen.

Get their names, their social media info and so on but most of all follow up after the conference ends. As for you, if you have a blog or any other type of social media page share it.

All around the conference you’ll see tables full of people promoting their books or services. Take the time to look and ask questions. If an author is promoting their book buy one. Some day that person behind that table could be you. We’re all in this together.

When the conference is over set aside a monthly plan to save for the next one. Make these conferences part of your yearly budget.

Writing conferences are by far the most valuable tool in terms of resources and personal support a writer will ever experience. I cannot express this enough. If you want to take your talent to the next level you need to go to one.

My hope is to see some of you in Portland this summer. Fingers crossed my knee agrees.

11 thoughts on “Your First Writer’s Conference”